Home > Blogs > CAR MADE FROM METAL AND FIBRE GLASS

CAR MADE FROM METAL AND FIBRE GLASS 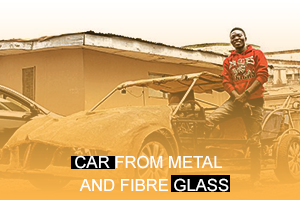 On a back street in the Nigerian town of Ibadan, a young man wanted more from life. So, he built his own car to move him around.

There is no question that when it comes to grabbing attention, Michael Ibitoye Olajide outperforms. Superlatives rend the air every time he steps onto the street in the northern Nigerian city of Ibadan and walks over to his parked car.

Ibitoye, studied botany at university but wanted to become a mechanical engineer and start his own vehicle manufacturing company. His route there? advertising himself. So he built his own car, from the ground up, using only scrap metal and parts he could afford. It is now a local social media sensation.

On the street, cheers erupt whenever his engine roars. Pedestrians, some of whom have not seen him and his vehicle except on social media, start gathering around the red “sports” car.

Ibitoye looks happy but his mood changes to one of exasperation and impatience as the crowd draws around. He has places to go. Two elderly women emerge from the crowd and approach his car. They start dancing, and singing, “Ibadan car! Our own made-in-Ibadan car”.

The car project dates back to 2017 when Ibitoye, frustrated at not being able to study mechanical engineering, put some of his study allowance aside and began planning, designing and buying bits and pieces for his project.

This was not Ibitoye’s first car project, according to a relative. Oluwayomi Christianah, Olajide’s aunt, said the Ibadan native had made a reputation for himself as a young child by dismantling toys and re-assembling them. “Any time we bought a toy gun or anything for him, he would break it, out of curiosity, and try to put the broken parts together again. That was when I noticed that this boy is going to be somebody in life,” she said. One project included making a car from cardboard boxes.

“Obviously, I can’t drive a car with cardboard around the town,” Ibitoye laughs. “I used fibreglass to make my car, instead of metal. Fibreglass is stronger than metal. After saving some money, back then, I got some iron rods, which I started welding together; but I was not good at it. So, I had to learn the act and arts, during which course I went partially blind for four days.”

Ibitoye’s welding improved after he had recovered, and so did the construction of the car, which he says is designed for local conditions. He says the design is “meant for roads in Nigeria. Any rough and tough road you take the car, it's good to go." The vehicle, which sports drop-wing doors, is rear-engined and is powered by a 1.6 litre Volkswagen engine.

Ibitoye is hardly the first Nigerian – or African - to create a buzz on social media with their home-honed engineering skills. Malawian William Kamkwamba was only 14 when he built an electricity-generating windmill in his parent’s yard, using bicycle parts, wood and scrap… a feat which spawned into a film. Nigeria’s homegrown vehicle industry has also been making waves of late, with Jos resident Jerry Malo appearing on local television thanks to his locally-assembled tractors and trailers, while domestic vehicle manufacturer Innoson Motors and its CEO Innocent Chukuma have become famous in Nigeria thanks to his ambition to build a local car manufacturing giant.

Nigeria has a long history of vehicle manufacturing. The United Africa Company started assembling Bedford trucks in the country in the 1950s and after the discovery of oil at Oloibiri in 1956, Nigeria soon had no fewer than six vehicle assembly plants operating. Peugeot has assembled cars in Nigeria under a joint venture with the Nigerian government, since 1973. The country currently has plans to build a major vehicle manufacturing industry, something Olaijde has set his sights – and heart – on.

Ibitoye makes it clear that his vehicle is not intended as a prototype; this is simply one built from self-fabricated components, and junk, he says. Which makes it a great mobile billboard for his mechanical – and creative - capabilities. “I only use this car as proof to people that I have the capability to make vehicles. I'd like to travel out of the country and study more. I didn’t study mechanical engineering, which was my dream course. I graduated from the university as a botanist,” he explained.

Does he find the drama of the spectacle he creates every time he drives his car, embarrassing? “Not at all. I’m used to it. People usually get thrilled whenever they see me proudly driving in my self-made car. Sometimes, some strangers get my car fuelled, for free, without me asking. Some strangers living outside the country even assisted me with money, which I used to upgrade my car.”

Has he attracted the attention he seeks? Not yet. “Countless times, I have tried but in vain to get the attention of the governor of my state, whenever I see his escorts on the road in Ibadan. I need some government support to make this dream work. I desire to bring together and train other skilful young Nigerians who share the same dreams with me.”

“I get discouraged sometimes,” says. But then the crowd moves in and his smile returns.

You don't have permission to watch movie

Enjoy watching movies at the tip of your fingers! Just click